Visiting a friend’s wedding in Moni and sleeping in Nua One, 5 minutes by car from Moni. The word ‘One’ means ‘house’ and also ‘inside house’. Nua is the word for village in Lio language. By invitation of our host Lopez we attended Rimbe, a traditional ceremony which takes place every year in October. The date depends on the position of the moon. 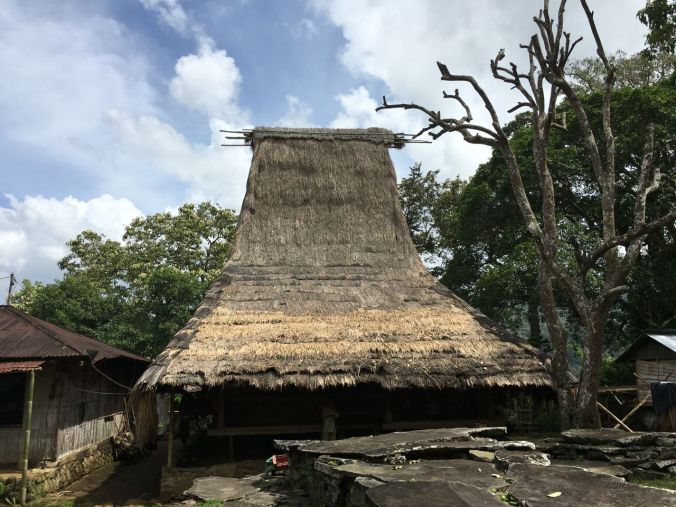 Rumah Adat in Nua One

Lopez explained Rimbe to us as follows: Prior to planting new crops offerings have to be made and a period of two weeks rest is declared by Mosalaki Pu’u – the chief of Nua One, Donatus Wara. During this resting period all villagers are strictly forbidden to work on their fields. Anyone breaking this resting time has to pay a fine of IDR 2.500.000 and in addition has to hand in a pig and rice. The pig and rice will then be consumed by all villagers in a communal meal.

This sacred ceremony takes place in the village centre in front of the Rumah Adat which is also the home of chief Donatus. This is a beautiful house, built according to traditional Lio architecture. The height of the house is 16 metres, with a roof made of bamboo and Alang Alang – dried grass. Only thirteen Lio men remain to this day, who master this building technique. 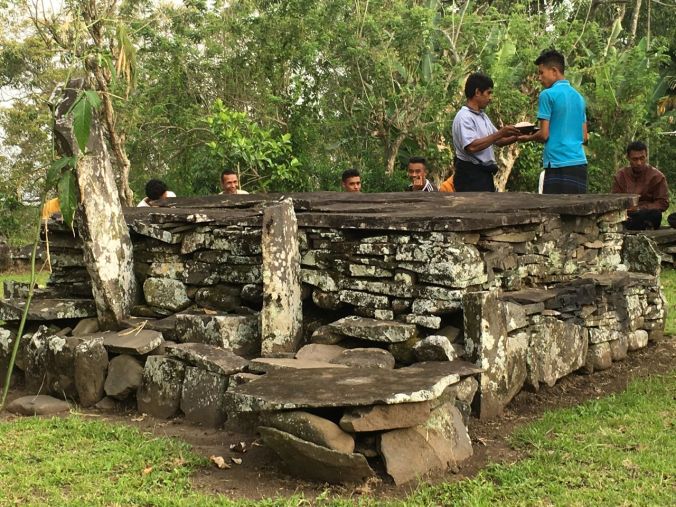 The meeting space in front of the Rumah Adat is called the Kanga. It consists of piled up stones and megalith. The Tubu Kanga is located in the centre of the Kanga. This is the place to do the offerings and it is also the grave of chiefs. Once a chief dies, the Tubu Kanga is opened, the remains of the previous chief are lifted from the grave and buried in another grave in the village. Next to the Tubu Kanga there are two small graves. One for the chief’s dog and one for a pig. Upon the chiefs death a pig will be offered and his dog will be killed. The soles of the chief’s feet will be covered by his dog’s blood. Thus the dog’s spirit will accompany his boss’ spirit on his travels to the crater lakes of Kelimutu, the place where all spirits go.

At sunset all men were seated in a circle and we as foreign women were allowed to join. All other women and children had to look from a distance. We were served a bowl with red rice, a bowl with chicken soup, water and arak. The responsibility for preparing this ceremonial meal lays in the hand of the Mosalaki Podo Ria, – the third chief of the village  (Podo = cooking) Ria ( Ria = Big).

Rumah Adat in Nua One 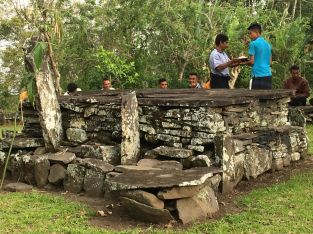 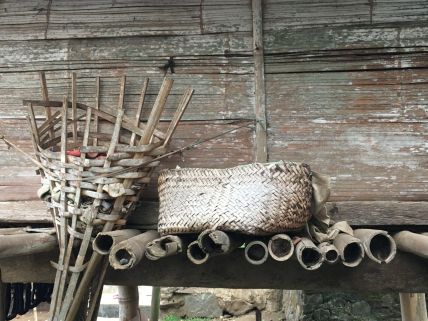 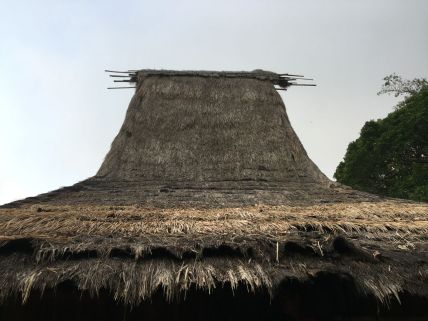 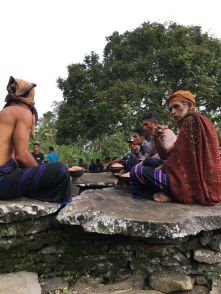 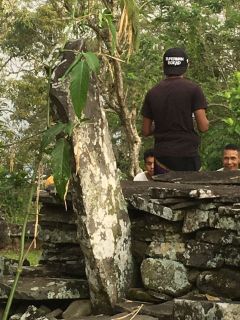 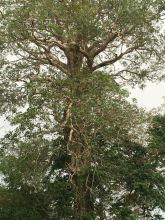 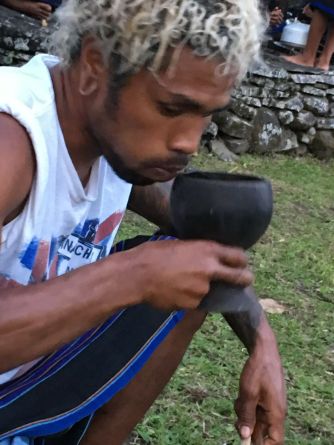 After the ceremonial meal chief Donatus started the ritual of Koe Kolu. He was handed a stick which he used to dig a hole next to the grave and planted a tree branch – as a symbol for good crops. Then he made the announcement: no work in the fields during six days. 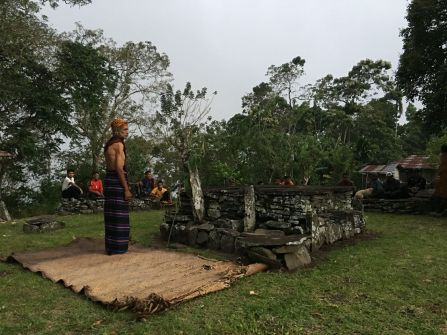 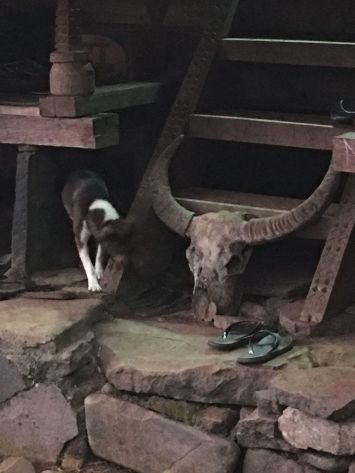 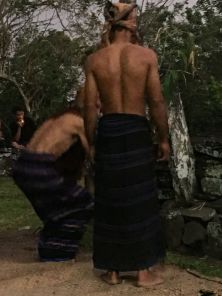 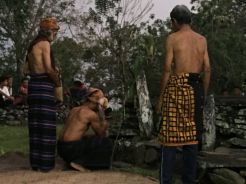 After planting the branch the ancestors received their Pa’a Loka – offerings of rice, chicken and arak. Donatus prepared some of each and threw these offerings to all four Wind directions, North, East, South and West, as to ask the ancestors to protect the village from all sides. During this sacred ceremony all where totally quiet, you could only hear the sound of Donates murmuring sacred words, insects and the sounds of barking dogs. 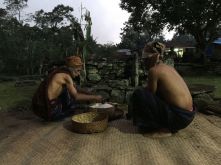 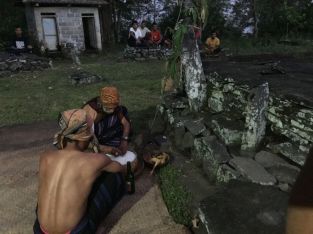 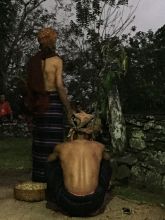 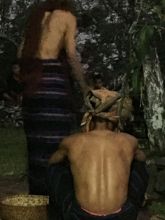 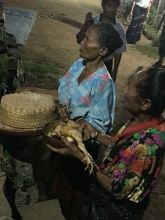 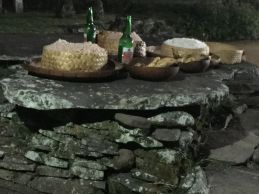 The offerings ready to serve to the ancestors

This moment I will never forget – Chief Donatus standing so still – the sky behind him a deep colour purple – and all around him waiting for what would come next. 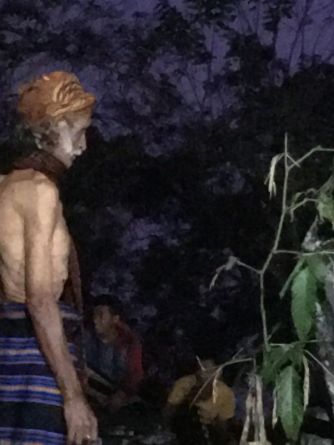 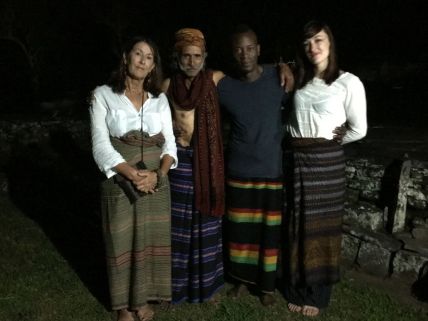 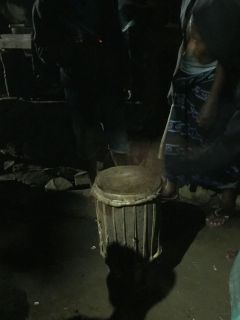 Symbol of power and strenght of the family

This house has two kitchen – one for each wife 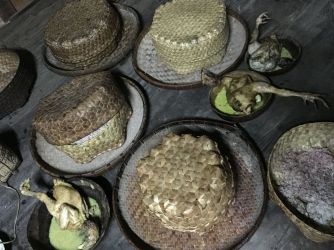 Inside of the roof 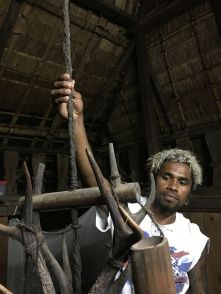 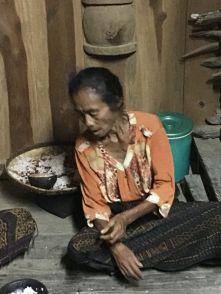 Symbolism for this families fortune 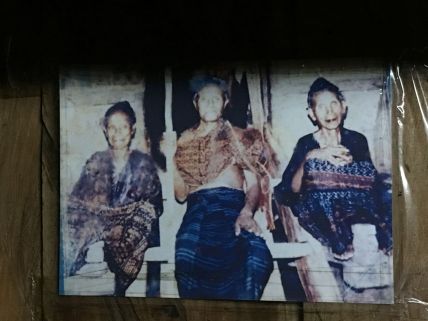 The previous chief with his two wives

Then men started playing gongs and traditional drums and the dancing started. The music went on all night. Next morning I went back to the Rumah Adat and the village was quiet, men playing cards and women busy with their usual chores of cooking and cleaning the house.

On the seventh day the second village chief – the Mosalaki Ria Bewa – who is also the village judge – will announce six more days of rest.

It’s lots of pictures, it was a mesmerising event and I just had to capture it step by step. 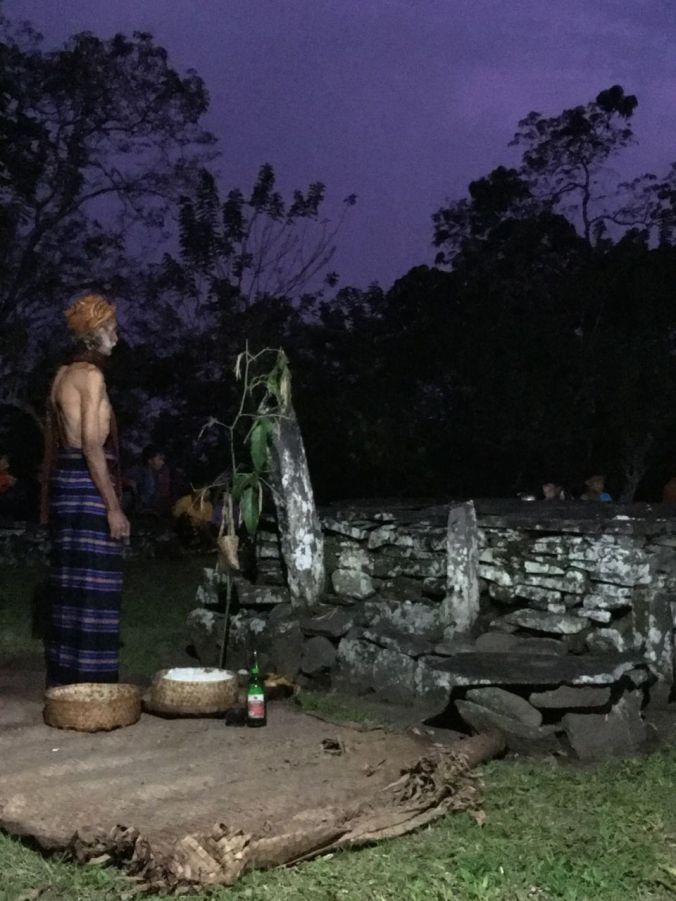 This moment I will never forget – Chief Donatus standing so still – the sky behind him a deep colour purple – and all around him waiting for what would come next.

Thanks Lopez for inviting us to this very special ceremony in your village !