“Language is an intrinsic part of who we are and what has, for good or evil, happened to us.” — Alice Walker

I’m no linguist and it took me a while to learn Bahasa Indonesia, which is actually not so difficult to learn once you understand the basics.

When it comes to local languages on Flores I get totally confused. There are so many! They stem from the Central-Eastern Malayo Polynesian language group. Hanna Fricke – a linguist – sent me the link to Glottolog . Via that link you can start exploring the Flores language map, find the names of all various languages and the location where they are spoken.

Then you also have the dialects and the influx of people from other islands. Many now hop over to Flores because it is such a booming area for tourism. I do not know much about the dialects, have to find out more.

Hanna is involved in an important research program on endangered languages in East Flores. On the website of The Endangered Languages Project you see many orange and red dots in this region. 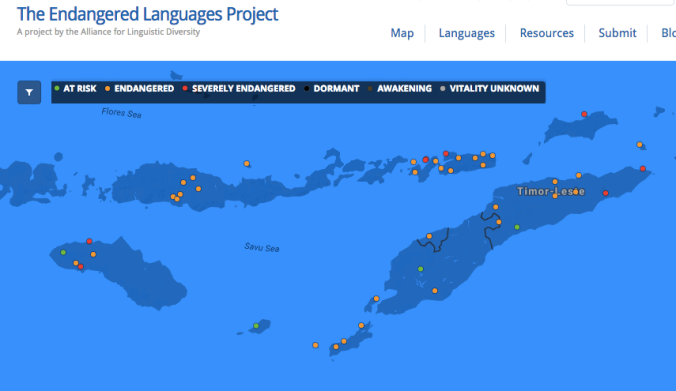 In 2012 I met Ilyas Hasan in the harbour of Larantuka. Ilyas is a Junior High School teacher on Solor Island. We talked briefly about Solor and the threat of disappearing local languages. Most local languages are only spoken, not in writing. Some school teachers have included local language skills in their program, but this is not structural, most schools only teach in Bahasa Indonesia and English. We talked about the effect of a language potentially dying in relation to Cultural Heritage. Linguists have done studies in various areas on Flores and in the past priests have made dictionaries; one example is Pater Verheijen, whose Manggarai dictionaries have been published by the National Library of Australia. Philip Neri in Bajawa has a file of approximately 2500 words in Ngadha local language

I started to ask around with people we met on the way, talking with people in Larantuka, Lamalera and Bajawa, asking people to translate the words Water, Moon, Wood, Rice and Sea into their own language. I forgot to note some down but underneath list shows how some words are so different in each area.  Water – Air – Aer – Fai – Wai – Nu / Moon – Bulan – Fula – Wula / Wood – Kayu – Kajo – Kaju / Rice – Nasi – Kluo  – Djeha / Sea – Laut – Tai – Wai – Bata

In 2015 I had this strange encounter with Simon Normand here in Manggarai. Simon told me about his Cultural Mapping of Song-lines of Mangarrayi people in southern Arnhem Land – where the Roper River begins it’s journey into the Gulf of Carpentaria. We started to philosophise about what if Manggaraians on Flores are related to the Mangarrayi people in Southern Arnhem Land, what if they migrated long long ago from Flores to Northern Australia …….. I have asked around but nobody seems to know anything about this. In this video Simon tells his story.

Thanks Hannah Fricke for always responding to my questions!